Itinerary 6
Ferrovia / Rialto via Ghetto
You get off the train and turn left for Lista di Spagna, so called for a Spanish Embassy [formerly] existing there. Having passed the Church of Santa Maria di Nazareth or of the Scalzi get away from the crowd in the second street that you find on your left, Calle della Misericordia. After a little while take the second street on the right. You will find yourself in the Saffa area. A place where new houses have been built. Go straight on through whatever streets you will find ahead of you. You will always come out onto the Cannaregio Canal. Once [you have] seen the water turn left for the Ponte dei Tre Archi [Bridge of the Three Arches]. Cross the bridge and turn right along the other bank opposite that which you were finding yourself. 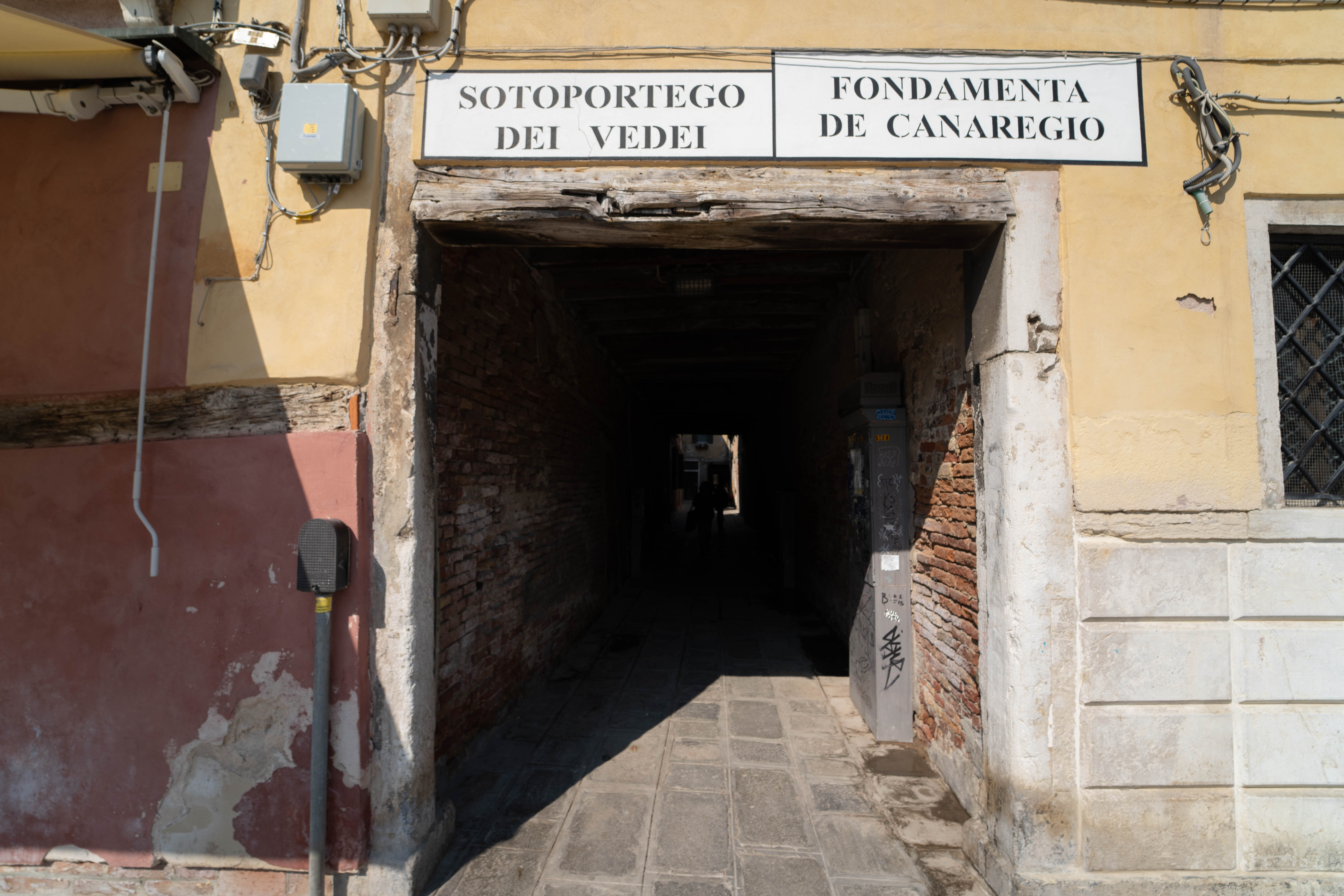 Take the Sotoportego (Sottoportico) dei Vedei (Vitelli) [the 5th turning on the left] and follow the street that takes you to Ponte del Batelo [or Battello]. The bridge is made of wood and the area is very calm and tranquil.
From the bridge continue to the right [then left] through Campiello Santo and then right again [and left again] for Calle del Batelo: we are on Rio di San Girolamo. We cross the bridge [and turn right] and we pass along the other bank, observing a wooden cross that every Venetian knows. Suffice to say:Do you know where the Cross of San Girolamo is? We leave the cross behind us and continue on our way. We are now on Fondamenta degli Ormesini. The ‘ormesini’ were certain silk material originally from Ormus [Hormuz] in Asia. In Venice at the time of the Serene Republic any type of foreign material was prohibited except the ‘canevazze’ [dusters] from Naples and the ‘ormesini’ from Florence. We continue along the fondamenta until we find two little huts at the foot of the Ponte del Ghetto Novo. The two little huts were a type of shelter for [the men] who had to ferry people to the mainland at the time when boats didn’t have internal combustion engines but arm engines [when boats didn’t have horsepower but manpower]. 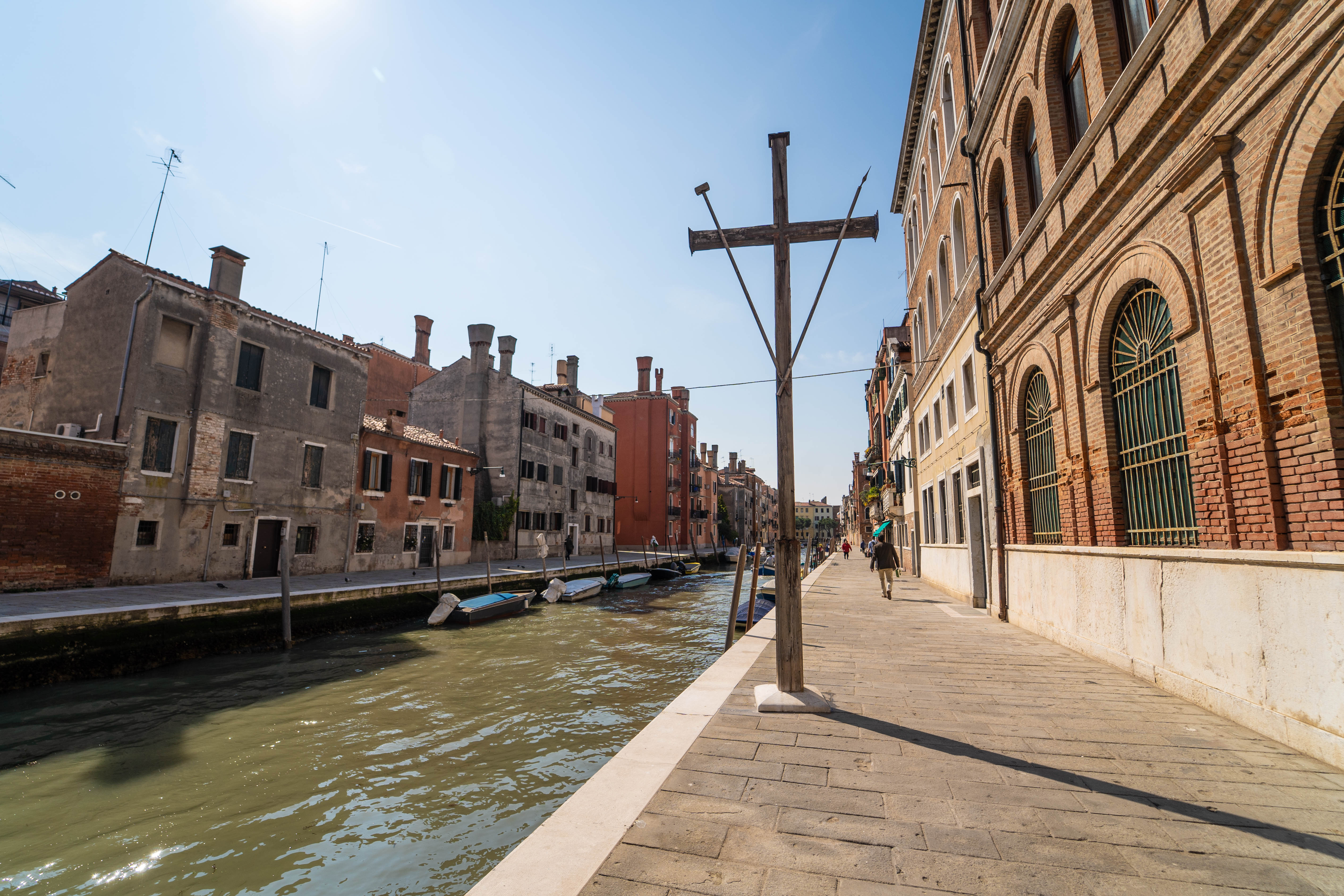 We get down from the bridge and find ourselves in the middle of another world, full of people in black and white clothes and of tourists who turn their heads form side to side, especially Americans. The Ghetto is an ancient place where the Jews used to live, as they [still] do now. Everyone knows that ‘ghetto’ is derived from the Venetian word, perhaps corrupted, for the former foundry of the Serenissima. Arriving from the bridge we find at once a sottoportico [on the left], straight after the sottoportico a wooden bridge. We cross the little bridge and turn immediately left under another sottoportico. Inside to the right [then] left and we come to Ponte degli Ormesini. We cross the bridge, go straight on through Calle della Malvasia (named after an old business selling sweet wines, for whom it was not known) and across the bridge of the same name. We turn right along the Fondamenta della Sensa (Ascension) so called because in that area there were the timber warehouses for the scenes of the Festa della Sensa that used to be prepared in St Mark’s Square.
We continue along the fondamenta until we arrive in the famous Campo dei Mori [Moors, possibly]. The Moors were the owners of the palace near here and they are found still embedded as statues in the wall (there is also a legend that sees them turned to statues on account of their greed). They are much photographed especially the one on the corner with the peculiarity of an iron nose that looks like one of those things that people with a sun allergy use. The gentleman is called Rioba and [this] also tells you [the name of] the restaurant close by [Fondamenta de la Misericordia, Cannaregio 2553]. It is worth going right round because near the bridge is also the house where Tintoretto was born. 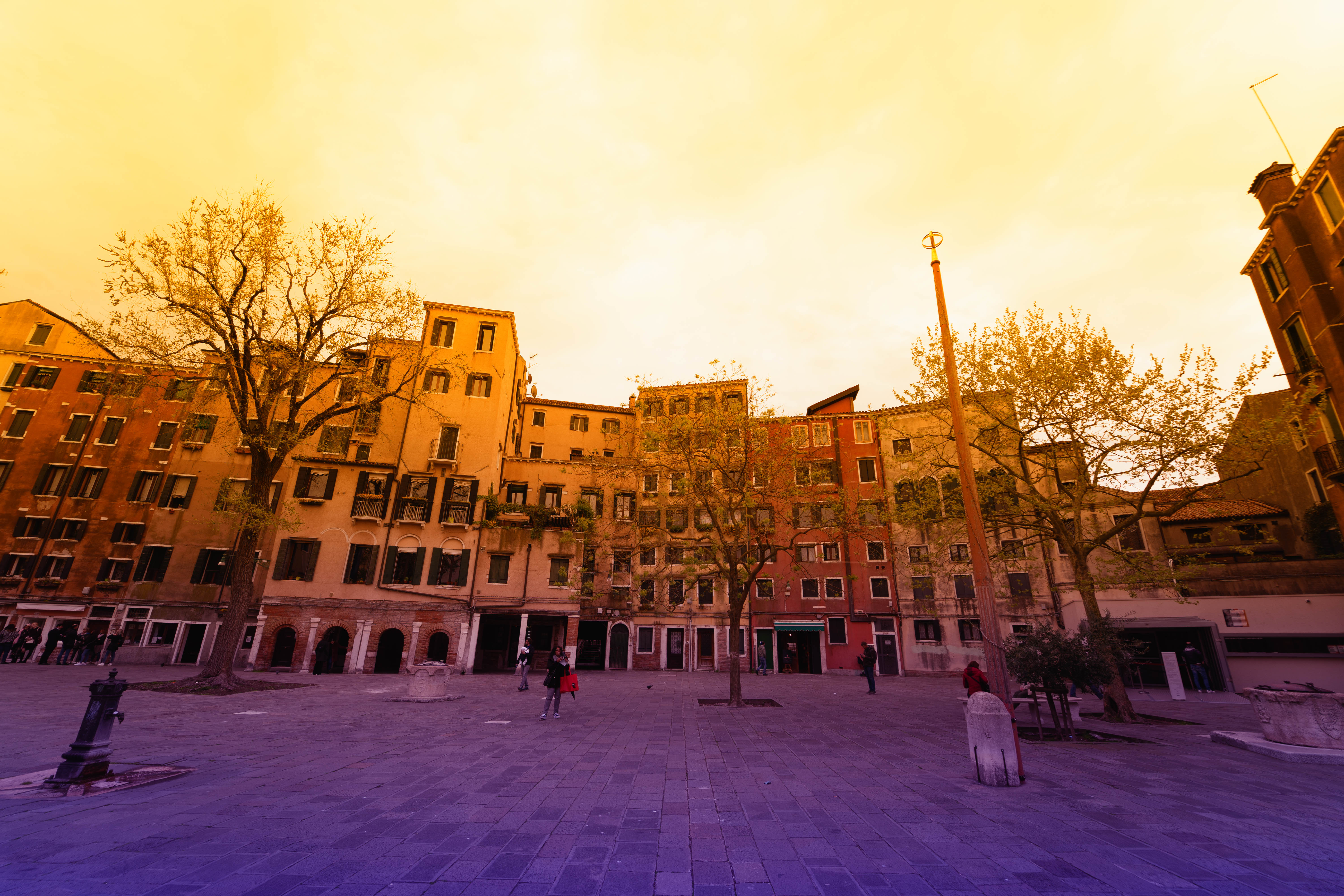 Well, let’s take Calle dei Mori and cross Ponte di Madonna dell’Orto. In front we have the church with a strange name, given because a Madonna appeared in a garden [orto] a long time ago (a similar thing happened at the Church of Santa Maria Formosa with the appearance of a Madonna in form). [The more usual explanation is that the Madonna that appeared was ‘formosa’, i.e. beautiful or shapely.] We turn right after the bridge on Fondamenta Contarini. At the end of the fondamenta we consider how many trees they (have) cut down to make the harbour of the Misericordia [Sacca della Misericordia] and we cross over the other bridge. At the end of the street we turn left on the Fondamenta dell’Abbazia. At the end cannot resist stopping a little while in this magic corner even if [it is] not well looked after.

We cross the wooden bridge and go along the Canal della Misericordia up to the other bridge. We cross this bridge too and notice the one ahead of us, the only one in Venice without bands, that is without parapets (the other is on Torcello … the Ponte del Diavolo) as they once used to be: without parapets or steps. We greet another of the most photographed bridges in Venice and continue along the Fondamenta di San Felice up to the next bridge, Ponte dei Preti [Ponte de la Racheta according to the map]. [Cross this bridge and] go under the portico and turn right on Calle della Racheta which was an old ball game [played with racquets]. We cross the Ponte dello Squero [or della Racheta] [and we are on] Calle Larga Priuli [Calle Larga del Dose Priuli]. At the end we will take note of an old fishing business. To the left crossing the Corte dei Pali già Testori.
At the end of the street we find the bar “Alla Vedova” so famous to doubt. We have to turn right and we come out into Strada Nova. [A] street so busy like a by-pass, Strada Nova is the street to use when you have to go from the railway station to Rialto in the shortest possible time. On foot. Having just come out, we have two choices: either we go straight on for Ca d’Oro to get on the landing stage for Line 1 that goes to the right to the railway station and left to Rialto or continue along Strada Nova to the left. Just a moment: what do you say to crossing the Grand Canal by traghetto? 50 euro cents to cross by gondola. Directions: straight on and turn right for the Stazio di Santa Fosca. Having arrived from the other side of the canal we can wander through the market.