Itinerary 5
San Basilio / Salute
Get off the vaporetto line 2 (and others but less frequent) at the San Basilio stop, go straight on Calle del Vento, so called because, by the Venturi effect, the wind here blows stronger than on other nearby streets (or is it a myth?). The short street comes out in Campo San Basegio, or Basilio in Italian, we cross the bridge and take Salizada di San Basegio. Here is the port zone just opened to the public. [There is a modern sculpture on your left by the entrance to the port zone.] However, we take the first little street we find on the right, Calle dei Frati, and at the end, to the right, Campazzo di San Sebastiano with the little house that must have been a squero [boatyard] (where the boats were built, before the building of the house in front. 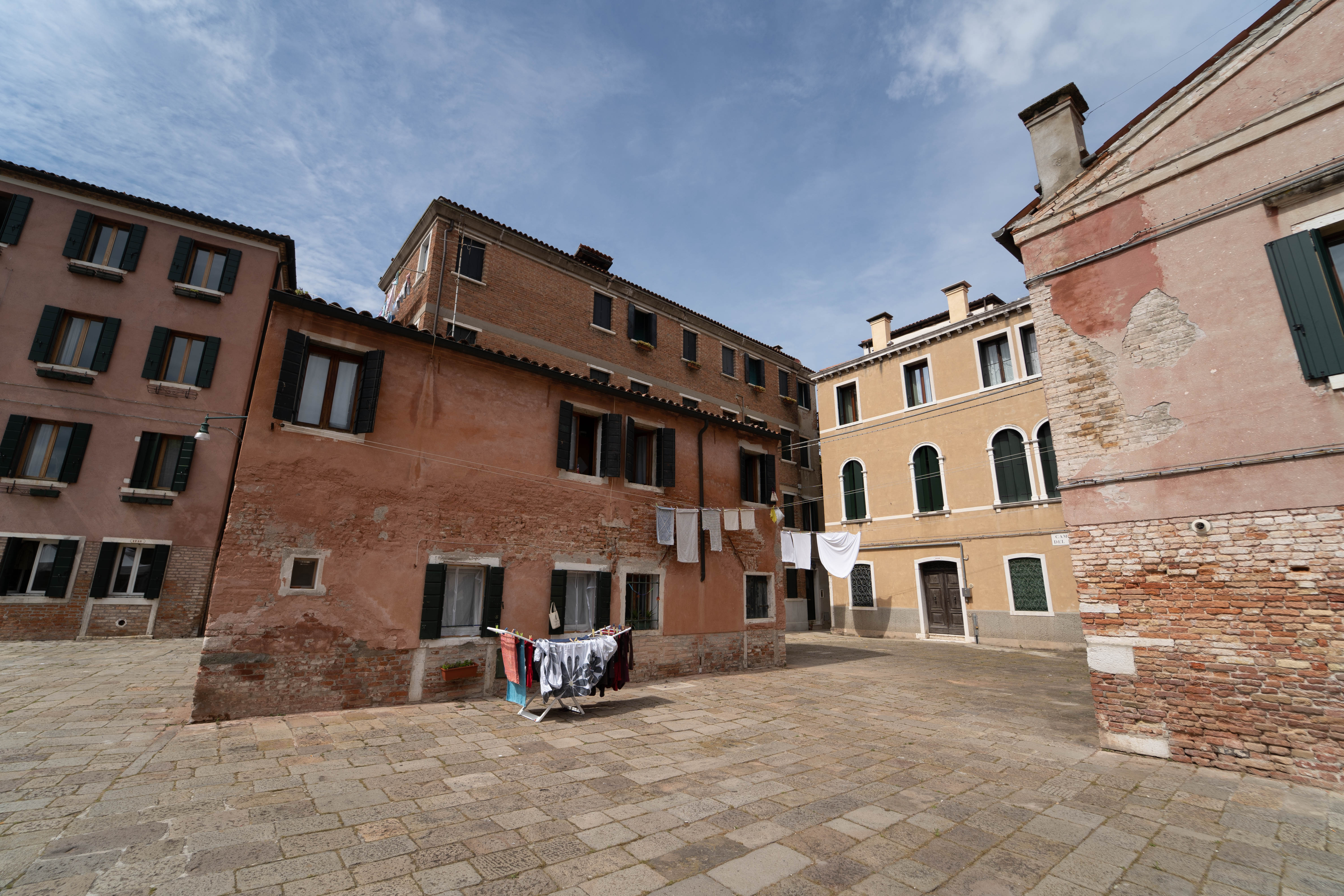 We take a walk round the little house and direct ourselves towards the church with two bell-towers, the Church of the Angel Rafael. When we find the rio we don\’t cross the first bridge we come to, but continue straight on along the fondamenta up to the next bridge running alongside a grassy raised area and the barracks of the Finanza [Customs].
The bridge takes us onto the ancient island of San Nicolò dei Mendicoli which is where the rivals of the Castellani, the Nicolotti, used to live. Venice used to be ‘split’ between the two areas [factions]: one looked toward the sea to the east, the Castellani with their workers of the Arsenal, and one [the other] toward the the land to the west, the Nicolotti of San Nicolò dei Mendicoli. Many times there were competitions that ended with real and actual crashes [collisions, clashes]. Having just crossed the bridge continue straight on up to the next bridge, Ponte delle Terese. We cross it and take the fondamenta to find ourselves facing the Church of San Nicolò. In front of us we also have the University of Architecture. We turn around and enter Calle del Cristo [and go] up to Ponte Novo di Santa Marta.
We step off the wooden bridge and go right taking the first narrow street we find, the one with buttresses that almost touch the house at the side. From the little street we go left over the crooked bridge. [Many bridges (at least eight) are called ‘Storto’ (crooked) in Venice. It simply means that they do not cross a rio at right angles.] Taking the first steps, we observe the church of Santa Maria Maggiore and the prison of the same name. We continue along Fondamenta dei Cereri and cross over the second bridge we come to, Ponte dei Guardiani, [and go straight down Calle dei Guardiani] coming out from the sottoportico at the end turning left. We go straight on, crossing Ponte Briati and then the next bridge, Ponte dei Foscarini. Facing us we have the Church of the Carmini.
We go round the corner of the church and go left for the legendary Campo Santa Margherita. The campo is a meeting-place for very many Venetians: the small fish and fruit market in the morning, bread shops, but also pizza by the slice, a place for children’s games in the afternoon and evening meeting-place for young people until late into the night in the many cafés and pubs. At this point we can do what[ever] we want to walking around the campo. When we have finished a little curiosity: the half-well. We have the truncated bell-tower of Santa Margherita in front and take Calle del Magazen [on our right] (the Magazen is [was] one of the ancient bars for [frequented by] the poor at one time) and we turn left for Calle dell’Aseo. We continue until the Calle becomes Corte dell’Aseo and see the half-well. [Ruskin found the well-head of Verona marble embedded in a wall while looking for the land entrance to a house on Rio San Pantalon that he had spotted from Ca’ Foscari.] 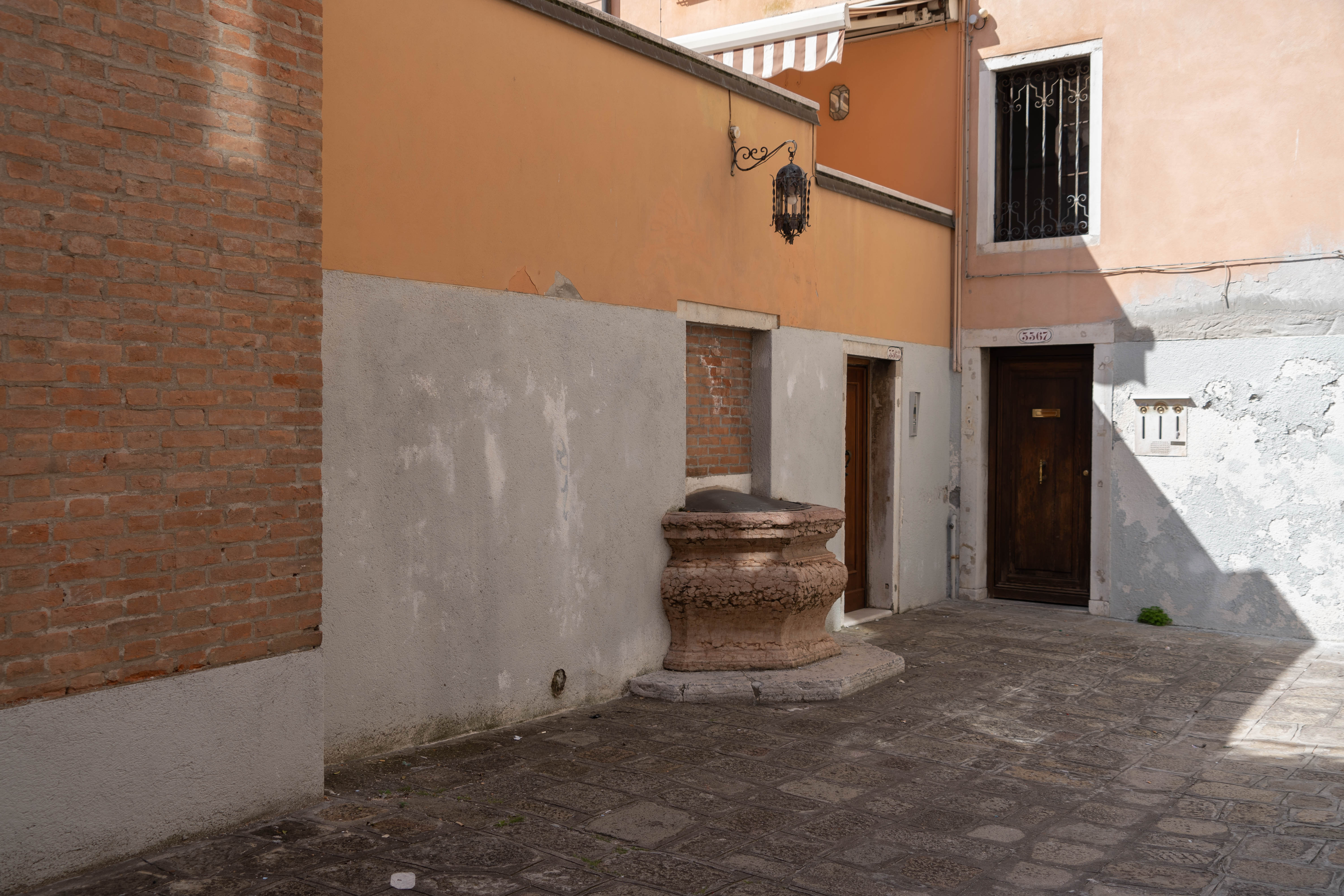 We return back to Campo Santa Marghe (to her friends) right back to where we arrived [in the campo]: facing us we must have the famous business that sells electrical products – Friselle. From here we turn right noting, again on the right, another famous business, of masks this time (perhaps the first [or foremost] mask business that has”dictated the styl” “set the styl”] for mask shops in Venice) [made] of papier-mâché most particularly [Mondo Novo, Rio Terra Canal 3063, Dorsoduro]. Go in only for curiosity. We cross Ponte dei Pugni [Fists or Punches] so called because here the Nicolotti and the Castellani (see above) used to give each other blows [used to have fights] first as a game, then for real. To commemorate this the four imprints in Istrian stone at the four sides [corners] of the bridge. We turn left near the greengrocer\’s barge. We are in Campo San Barnaba where the Indiana Jones/Harrison Ford movie” Indiana Jones and the Last Crusad” was filmed in front of the church. From a small tomb, which is not [actually] there, out came Indiana and …
We go under the portico with two arches ([Sottoportico] del Casin dei Nobili: the brothel of the time) which you will see on turning to your right, with the church in front [i.e. stand facing the church, then turn right and you will see the sottoportico], and continnue over the Ponte Lombardo to the Fondamenta della Toletta where you will find the famous half-price shop (but now the company has grown and it is everywhere) that all Venetians know. ‘Toletta’ because, when all 416 bridges did not exist, they used to cross the canal on a sort of little raft or ‘toletta’ ([literally] a little table ? [‘table’ is ‘tavola’ in Italian, ‘tola’ in Venetian dialect]). We carry on to the next bridge, Ponte delle Maravegie (from the name of an old family). Across the bridge, we turn right along Fondamenta Priuli and go into Calle del Pistor [Baker]. Coming out we have in front the side of the Accademia Museum. We turn right and then immediately left.
We cross over the Rio Terà Foscarini (or, as we say, Rio Terà agli Alboreti on account of the presence of thin [or stunted] shrubs along the street) and we squeeze ourselves right in front, in Calle Pompea, the one with the sottoportico. From the street we turn left then right. We take Ponte di San Vio and carry straight on along the narrow street. Around these parts there is the Guggenheim Museum, Palazzo Ca’ Dario … many houses are inhabited for the most part by famous foreigners and artists of every type. At the end of the narrow street turn we turn immediately right and take Ponte del Formager. Left and right into the Sottoportico del Forno. At the end of the street, Calle del Forno, we turn left then right and then right again. We are in Campiello Drio agli Incurabili [Incurables]. The incurables were those who were diagnosed with an incurable disease and who were waiting to die. We are almost there. 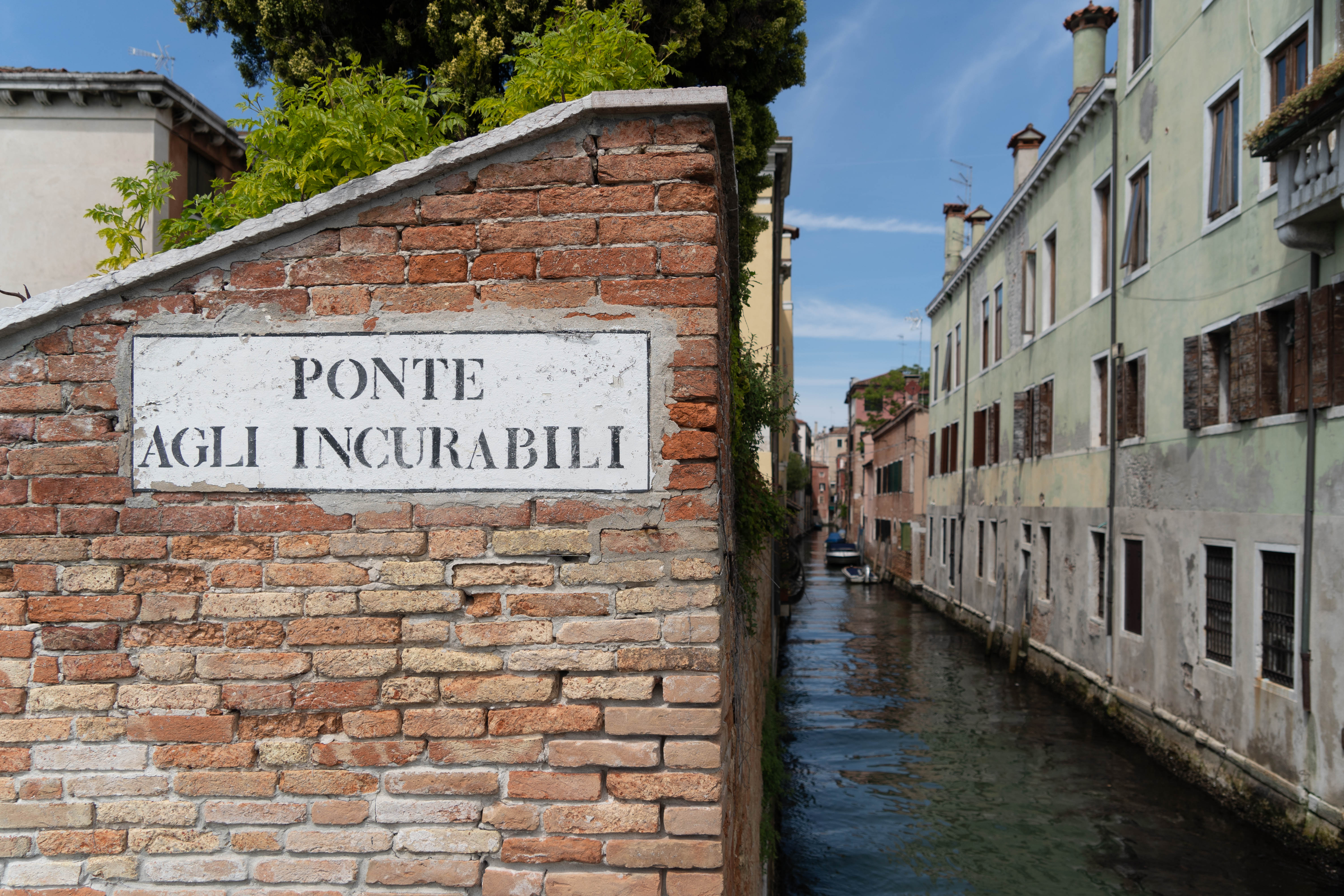 When we are in Campiello degli Incurabili [Campiello Drio agli Incurabili] we take a right then left into the sottoportico. At the end we can see something that gives us the impression of really emerging from a tunnel. Indeed, at the end of the street we come out onto the wide Giudecca Canal. Now we have two things we can do: either turn right and go back to San Basilio taking the sunny canal bank [called] the Zattere or to the left to Punta della Dogana. In the latter case, [which is] advised, take the bank until you come to the end and stop to look at San Giorgio in front of you and San Marco to the left. Take the fondamenta that turns back along the other side up to the Church of the Salute. This itinerary is finished too.