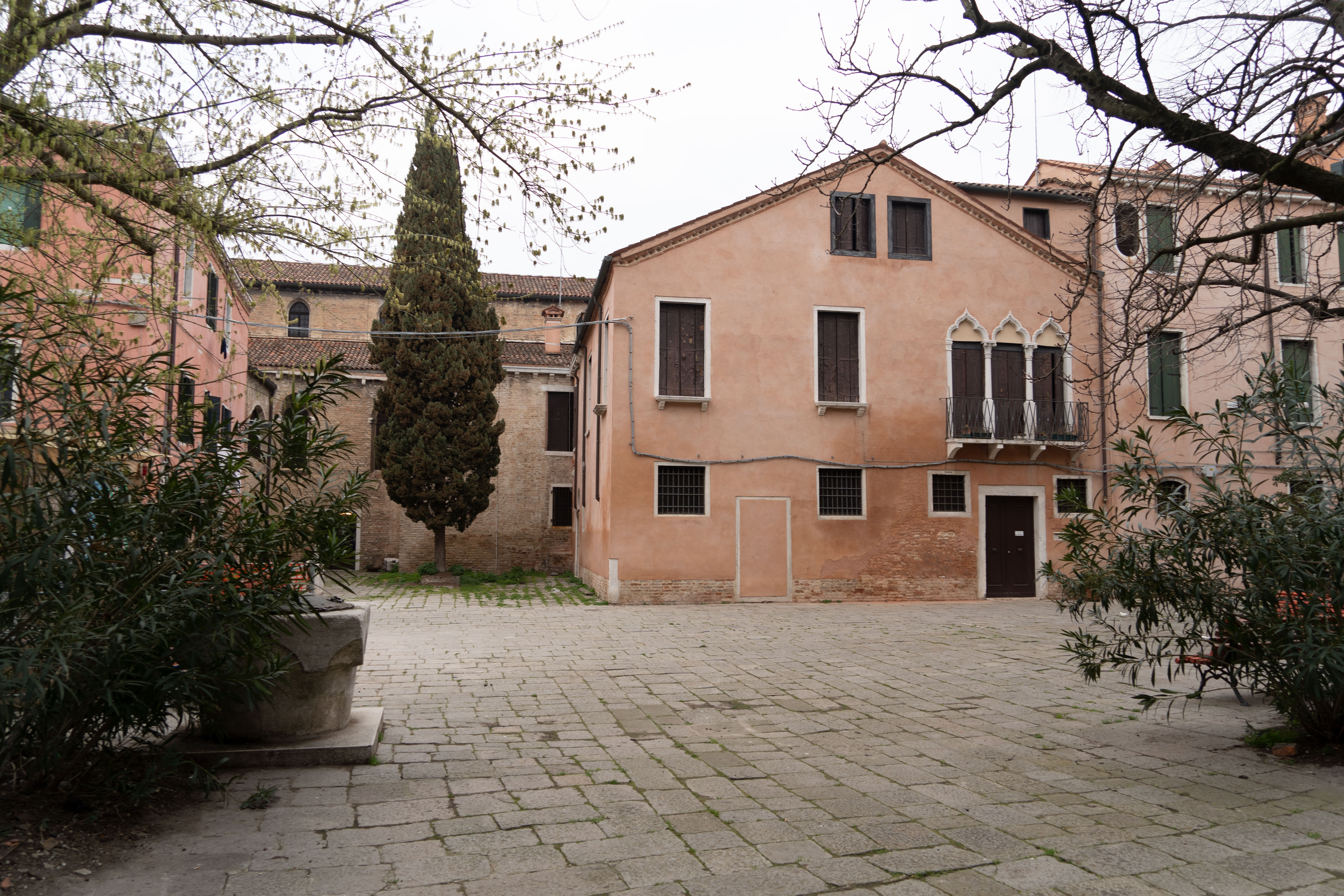 You always leave from San Marco and get yourself to Riva degli Schiavoni. If there are too many people around you know enough to take a (side-) street and everything disappears as if by magic: you are alone – you and Venice. [There are no side-streets to take between San Marco and Riva degli Schiavoni.]
After crossing the Ponte de la Paglia, del Vin, de la Pietá and del Sepolcro, turn left into Calle del Forno, just before the Gabbiano Restaurant [No.4122]. Having taken the Calle del Forno, admire in peace the whole of Campo del Piovan with its three wells [‘piovan’ from ‘piova’, ‘pioggia’ in Italian (rain), or otherwise from the guardian of the wells, that is, the priest] and go straight on. At the end of the street you will notice a modest butcher’s shop (Ugo and Narciso) you get my [the author’s] name and go straight on again along Calle del Pestrin (or Milk Seller). Pass the famous Corte Sconta [seafood restaurant, No 3886], turn right and take the decrepit iron bridge which takes you in front of the Church of St Martin [San Martino]. A church of very ancient foundation, but rebuilt in 1540. Look at the façade of the church and stand in front of it, turn around and take the Ponte dei Penini (or little feet of lamb and mutton that they used to sell nearby). Follow the walls of the Arsenale and then the fondamenta up to the Campo delle Gorne (Venetian for ‘grondaie’ – gutters, downspouts). 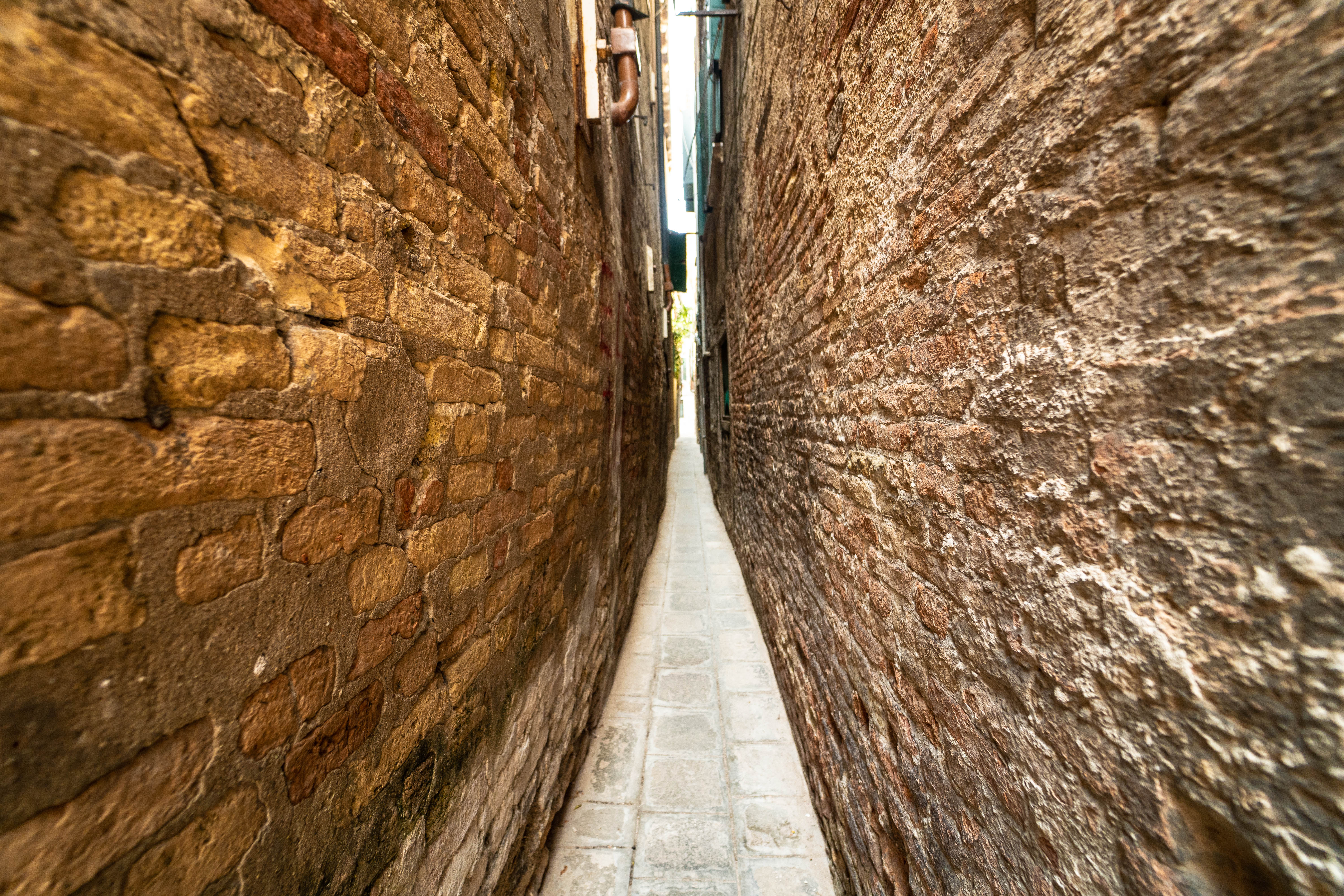 Thread yourself into the second street that you come to [on the left]. The street is very narrow, one of the narrowest in Venice. At the end of the street turn right, then left, go under the sottoportico that takes you into Corte Soranzo, outside from the street that you have on your right keep straight on to the Ponte degli Scudi. Once over the bridge, to your left Campo de le Gate (which is not named after ‘gatte’ [cats] but after the ‘legati’ [legates] of the Serene Republic) where there used to be the house where Ugo Foscolo [1778-1827, writer and poet] was born. 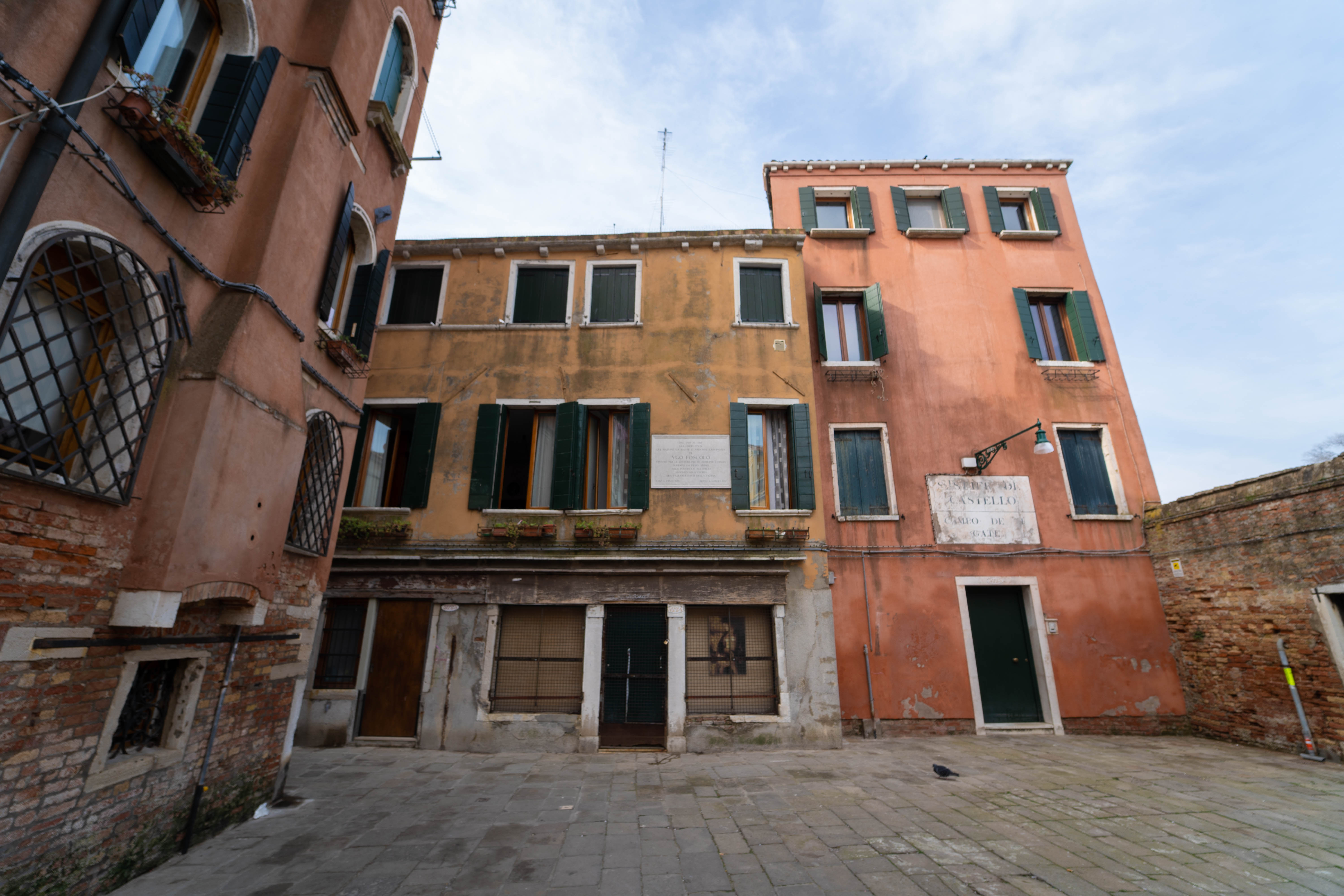 But go to the right until you come to a bar on the left and a street, Calle dell’Ogio, on your right. Go into Calle dell’Ogio (Olio – oil) and go all the way along it to the end. At the end of the street turn left, then right into Campiello Santa Ternitá. [A] pleasant place with so many old women who chat [or argue] on the only bench in the square.
Take the bridge that is in front of you, Ponte del Suffragio [Prayer], and follow the Fondamenta del Cristo and you will find yourself in the Celestia area. The Campo della Celestia welcomes you with its campanile, that of the Church of San Francesco. At the end of the campo, turn left on Calle del Cimitero. Nothing special: at first the cemeteries of Venice were beside the churches, then they decided to collect the dead together on the island of San Ariano [or Sant’Ariano] [Adrian] and then, as the custom is now since the time of Napoleon, on the island of San Michele. Observe to the right the curious arch, of which the purpose is not known. Go to the end of the street and turn left, then right, not before having read the marble plaque on the house that faces you. Discover it yourself. You are now in the Campo della Confraternitá next to the Church of San Francesco della Vigna (this area was once full of vineyards).
Observe that unusual colonnade (from these places Ligabue [Italian singer] filmed the famous music video “Small Star without Sky”) on your left and go over the bridge you can see. Just over the bridge go alongside the Morion Social Centre and turn right onto the Salizzada (i.e. one of the first streets paved [with stone] in Venice) Santa Giustina. A small historical detour: go into the street on your left until you see a sottoportico. Legend says that the Madonna appeared here [and] that she announced the end of the plague that was raging many years ago. A red stone on the ground commemorates this. For many students who drag themselves to the schools near here, however, treading on the red stone means bad luck. 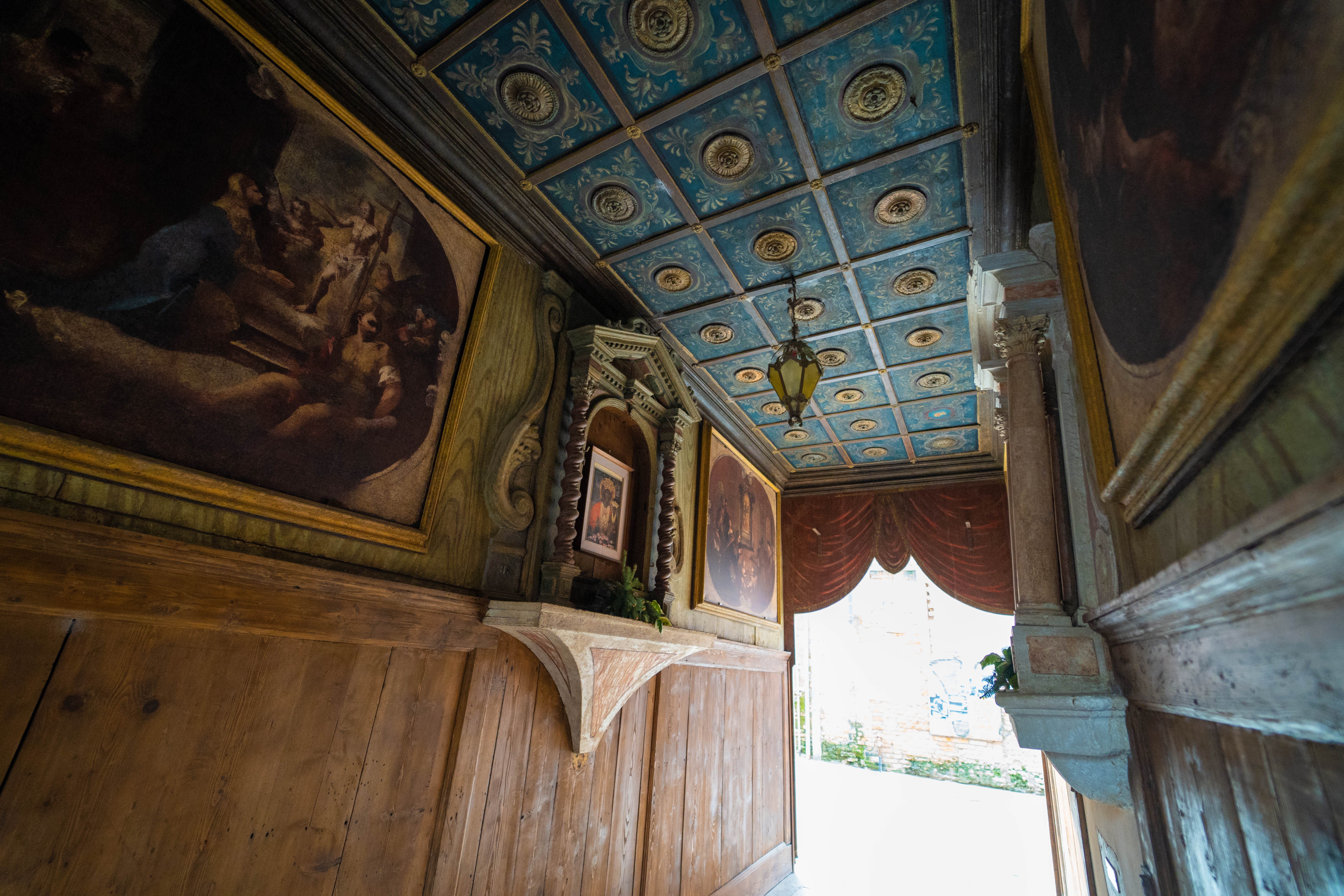 Turn back and proceed along your route. Take the bridge and stop just on the other side on the right: look under the capital [or capitello, image of the Virgin and Child]. 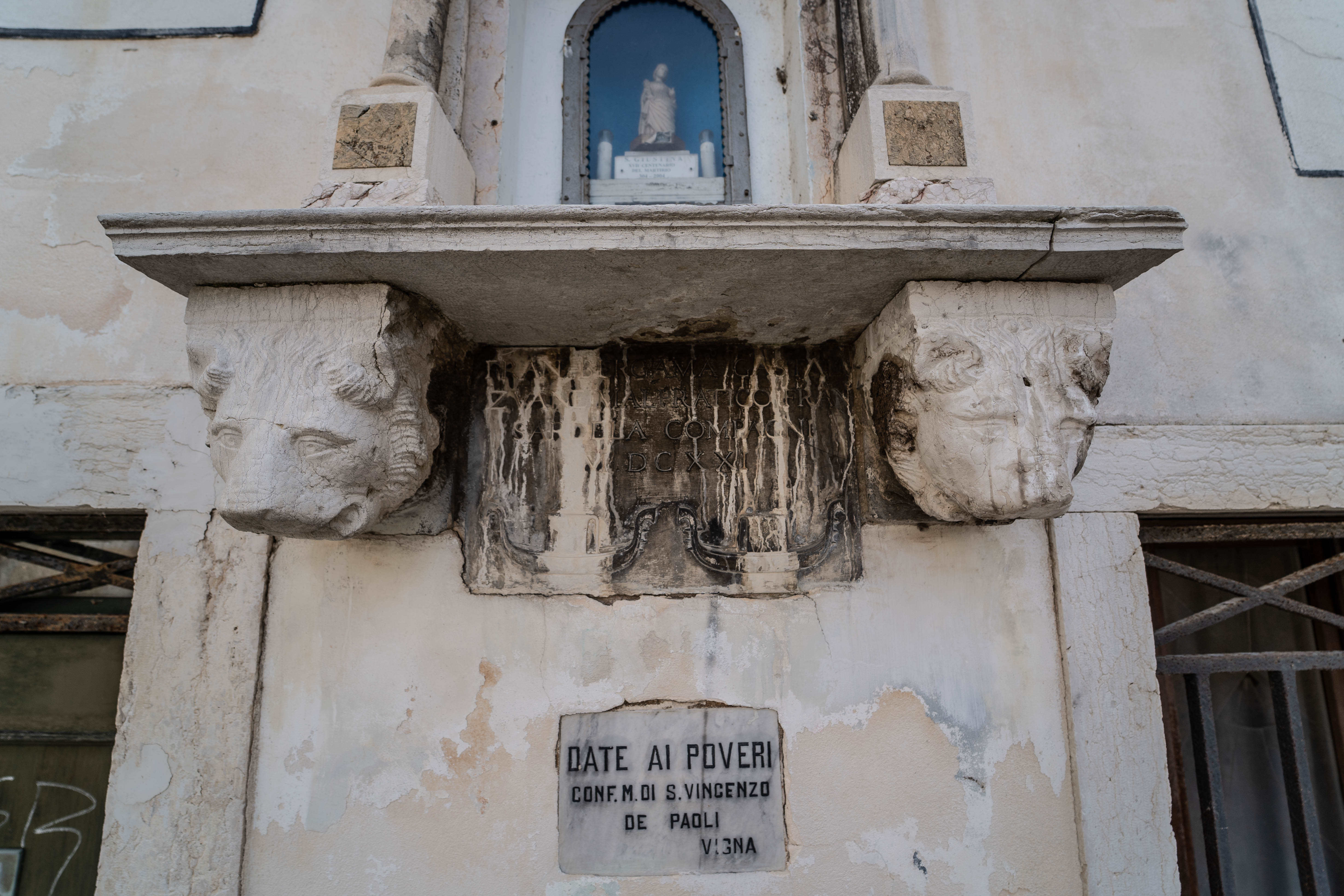 From here go left and admire a private bridge always covered in weeds, go right and take the other bridge, stopping in the middle. Facing you, a long way off, you see the cemetery of San Michele and behind you the sign of the presence of the classical, scientific and artistic high schools. After the bridge, at the end of Calle Zen, turn right where there are the shop windows of Aldo Strasse, a mythical business born in the 1970s where they used to sell and where they sell even now second-hand clothes. Turn into the busy street to the left that further on will be called Barbaría delle Tole. All Venetians know it if only for the fact that it has become a way of saying to understand a Venetian that wants to speak Italian saying ‘Barbaría delle Tavole’. 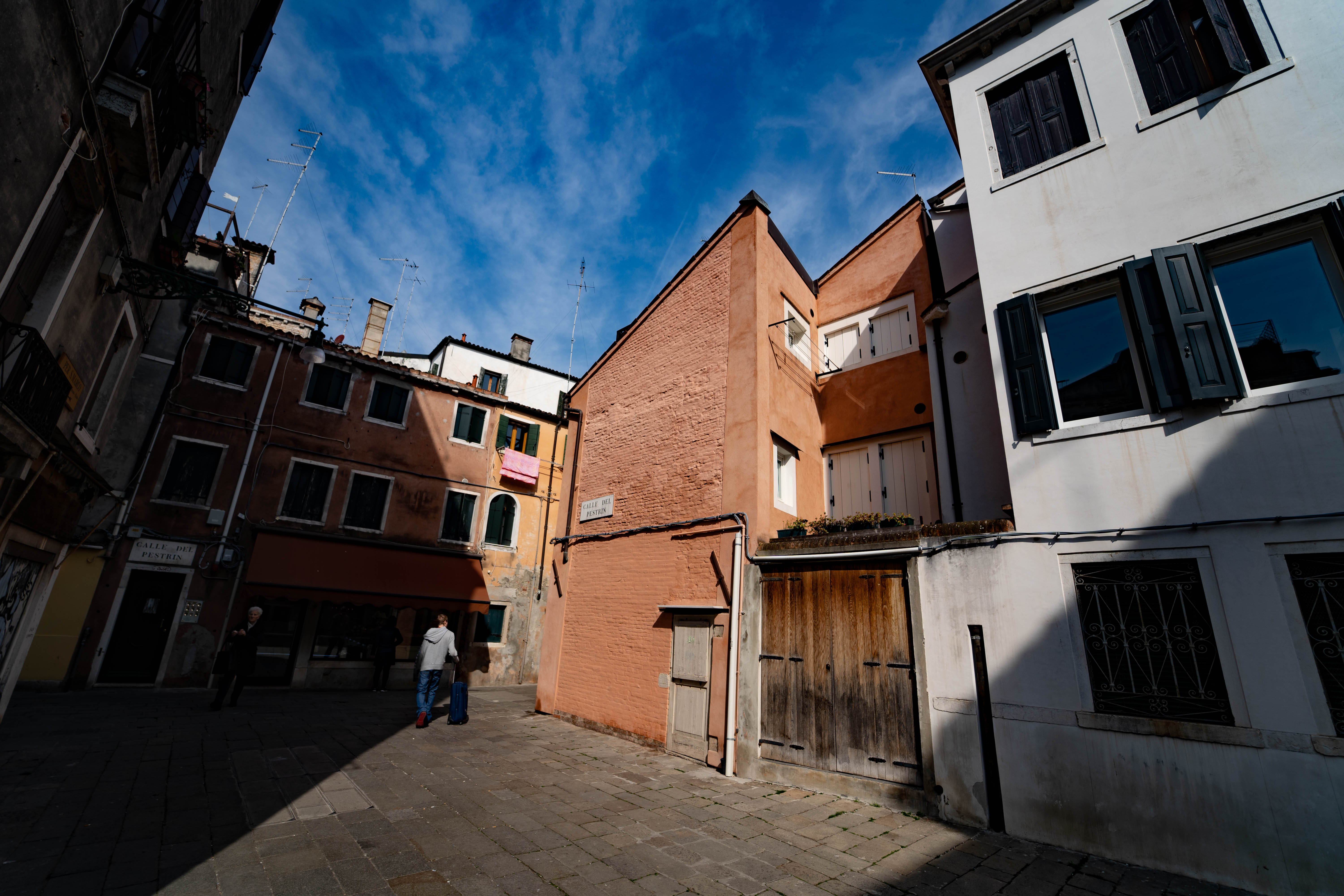