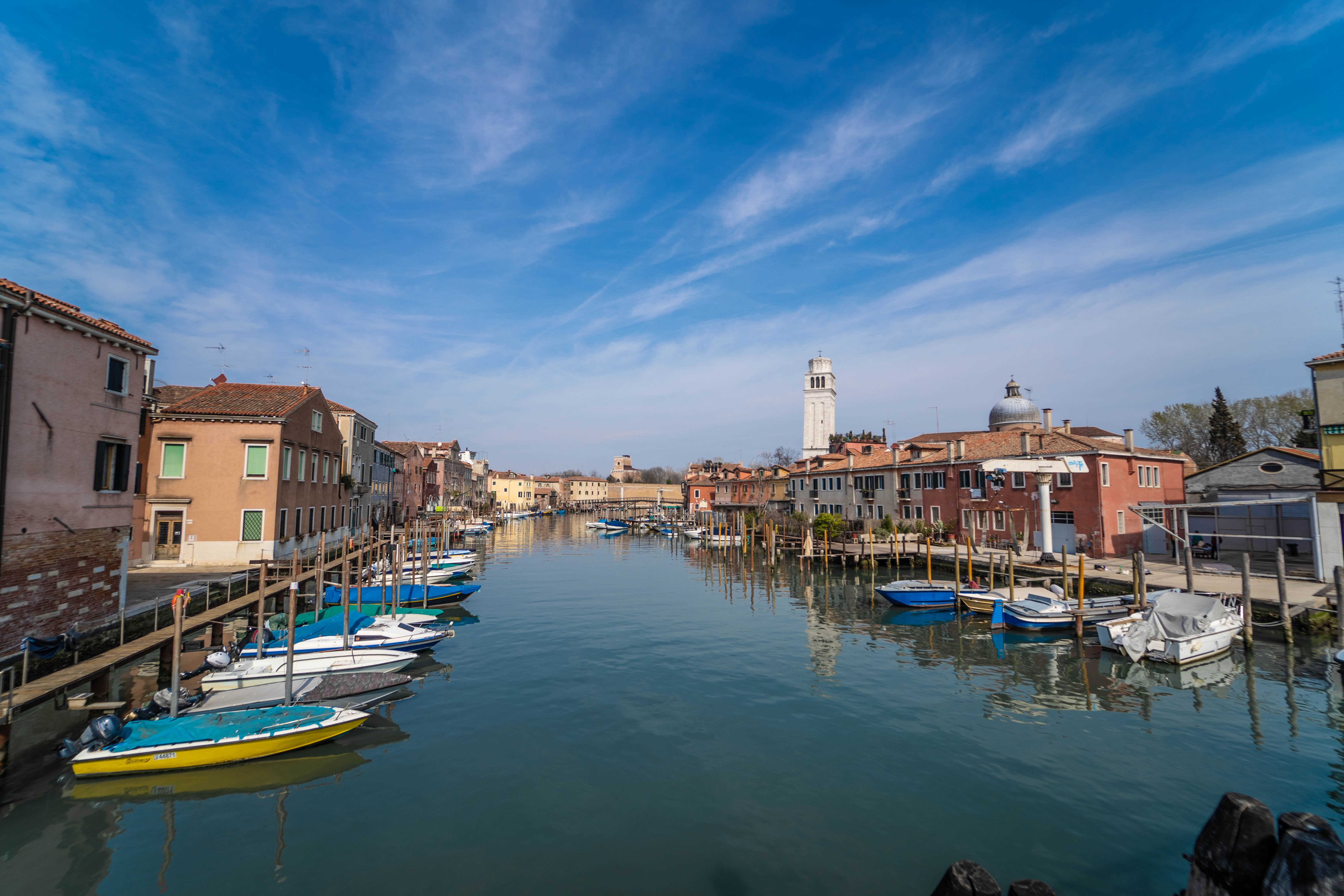 Having left the area called Quintavalle, which takes its name from an old Venetian family, we cross the Ponte di Quintavalle to the Fondamenta S Anna (Santana, as the Venetians say) and proceed along it. The rio stops because it was filled in a long time ago to make the Via Garibaldi, which we have already had a glimpse of earlier. At the far end of the fondamenta, just before the boats which are used for the sale of fruit and vegetables, we turn to the left under the Sottoportico de le Ancore. Straight on until the little street ends at the very popular (or very ordinary) area of Secco Marina. We take the Calle de la Cenere which is almost straight in front of us and come out at the Rio di San Isepo (San Giuseppe). We cross the bridge to our left to get to Campo San Isepo.
We carry on across the campo. We have two choices: either we turn right at the end for the Gardens of Castello and return to San Marco or we turn left for the Island of S Élena. Let’s pretend we are tired and turn right at the end of the campo. We are in the Giardini Pubblici (Public Gardens) of Castello, where, on the left, we have the centre for the Biennale which we can have a look at. But, if we want to, let’s go straight on and then turn right to get out. When we have left the Gardens we turn to the north, going over the bridge without steps all the way down the tree-lined avenue, where, at the end, we find the statue of Giuseppe Garibaldi with his back to us, but his guard, Bepi, with his arms crossed, facing us. We go through the large black railing and turn left on, finally, Via Garibaldi. A very popular thoroughfare, Via Garibaldi has everything needed to be considered a district of Venice, with its bars, hostelries, chemist’s, cake shops, baker’s and shops for Venetians. We cannot do it all, but we into the second street on the left, Calle Schiavona, and then, slightly to the right, into Calle delle Colonne. We leave the calle and come out onto the Riva dei Sette Martiri, named in honour of the seven Italians killed by the Germans in the Second World War and where, until a short time ago, there was a short “riva” with, where many houses once stood, the sheds of the motor torpedo-boats and E-boats of the First and Second World Wars and other shipyards. In fact, where we came out, the houses with the two high arches are called the Case della Marinaressa [or Marinarezza], built for the workers of the Arsenale at the time of the Republic which were used as “squeri” (boat builders’ yards).
We turn to the west, towards San Marco. We cross the Ponte della Veneta Marina, then the Ponte dell’Arsenale (the stone one): we are once again on the Riva degli Schiavoni. We are back.
S. Pietro
Il Rielo
Tabella delle misure minime del pesce
Cime e ancore a Quintavalle